The day feels slow and languid and long and loud and like it is rushing by.  The pressing weight of grief.  Precise and heavy and yet 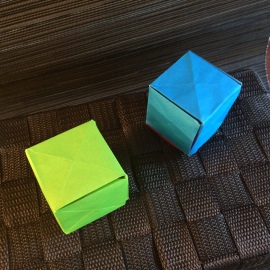 And, outside, the sun shines.
And on the radio: old music, drifting, from an earlier era and yet timeless; the Jonathan Schwartz show.
Timeless drifting like the classical music on the radio in my father’s house, decades ago.  Long child-days.  Too slow and stifled by something like silent grief.
But here today, my home, one child plays in the background, not overwhelmed by the sorrows.  Of the day and the world.  And the other child outside, in the city, vigorously embracing the action of bike and ferry and kite, with his dad.

My Dad: he would have been eighty-two today.  His birthday now all knotted up with 9/11, not just September 11th.  I lit a candle during a few moments of calm this morning, thinking of others’ losses, and the world’s losses, and him.  The city that day fifteen years ago.  The same beautiful sunshine.  And then the meeting of incongruities, to which I was no stranger.
Acrid smoke, dazed New Yorkers, the smell of death.  In my apartment, which I had almost figured out how to rid of death as pervasive presence, though my father had died seven years earlier, on a different marked day, eight-hundred miles away.  One gun, unhidden, one suicide.  No airplanes, terrorists, burning buildings.

Buildings.  Accordion-collapsing, a fluidity of disappearing concrete and steel that still baffles me.  Remembering the image of the second tower.  Gone, as though one could blink: and make a building disappear.  Staring down Fifth Avenue, blocks from my home then, from my home now, with thousands of miles traveled in those years between.  New births.  Other countries.  New deaths, lucky though I have been.

Today: I learn of a child.  A friend of my son’s lost his father this past week.  It feels wrong to write this; and yet this is all I know to do: write one’s way out of grief.  Through it; into it.  Looking for the other side.  I forget how to do this myself.  But this is my life – the life I made or chose, and also the life given to me.  I ask others to write too.  To believe.  From wreckage we must sculpt something new.

All these years of life and death and still it feels difficult to know what to do, how to help.  I explain to my son: how he can just be there, be a friend.  Let his friend know he can talk about his dad, or not.  I want to see the two boys sit together and draw and write, as though one could imagine into reality the process of healing.  Other losses glue together, old and new: a grieving tapestry of the world.  But sewn together, I wish for something united and beautiful.

This morning the same son made origami boxes, “seamless,” they are called.  He wasn’t sure he could figure out how to build all the sides, and bring them together, the box complete.  He told me they can be made so that the earlier folds don’t show, on the finished box, but he doesn’t know how.  But what would a life be without the creases?  The boxes are small and delicate, yet tangible.  Real.  One blew away, this morning, disappeared beneath the soccer field’s metallic bleachers.  Though we couldn’t find it, I believe it’s still there.  I can’t make one myself; but I remember how my son did, and how he wasn’t sure if he could figure out how to complete it, but his fingers kept moving.  Folding and creasing, until some internal instinct helped him find the way.

http://karakrauze.com Kara Krauze is a writer, consultant, and educator. Kara has worked in publishing, financial services, the mental health field, and community organizing. Her essays have been published in Quarterly West, Center: A Journal of the Literary Arts, Highbrow Magazine, the Los Angeles Review of Books, and elsewhere. She has a B.A. from Vassar College in International Studies and a M.A. in Literary Cultures from New York University. She has participated in workshops in New York City, Prague, and France, studied in Moscow and lived in London. Her writing, including a memoir and novels, engages with the subjects of war, loss, and memory. She grew up in Ohio and currently lives in New York City. Kara founded Voices From War, offering writing workshops for veterans, in 2013. http://VoicesFromWar.org
View all posts by Kara Krauze →
This entry was posted in EXIT WOUND: Suicide is Not a Love Story, Grief & grieving, Memory, Motherhood, Suicide, Writing & Reading and tagged 9/11, grief, memory, motherhood, parenting, post-traumatic stress, suicide, writing. Bookmark the permalink.

1 Response to This Day (Origami Boxes)